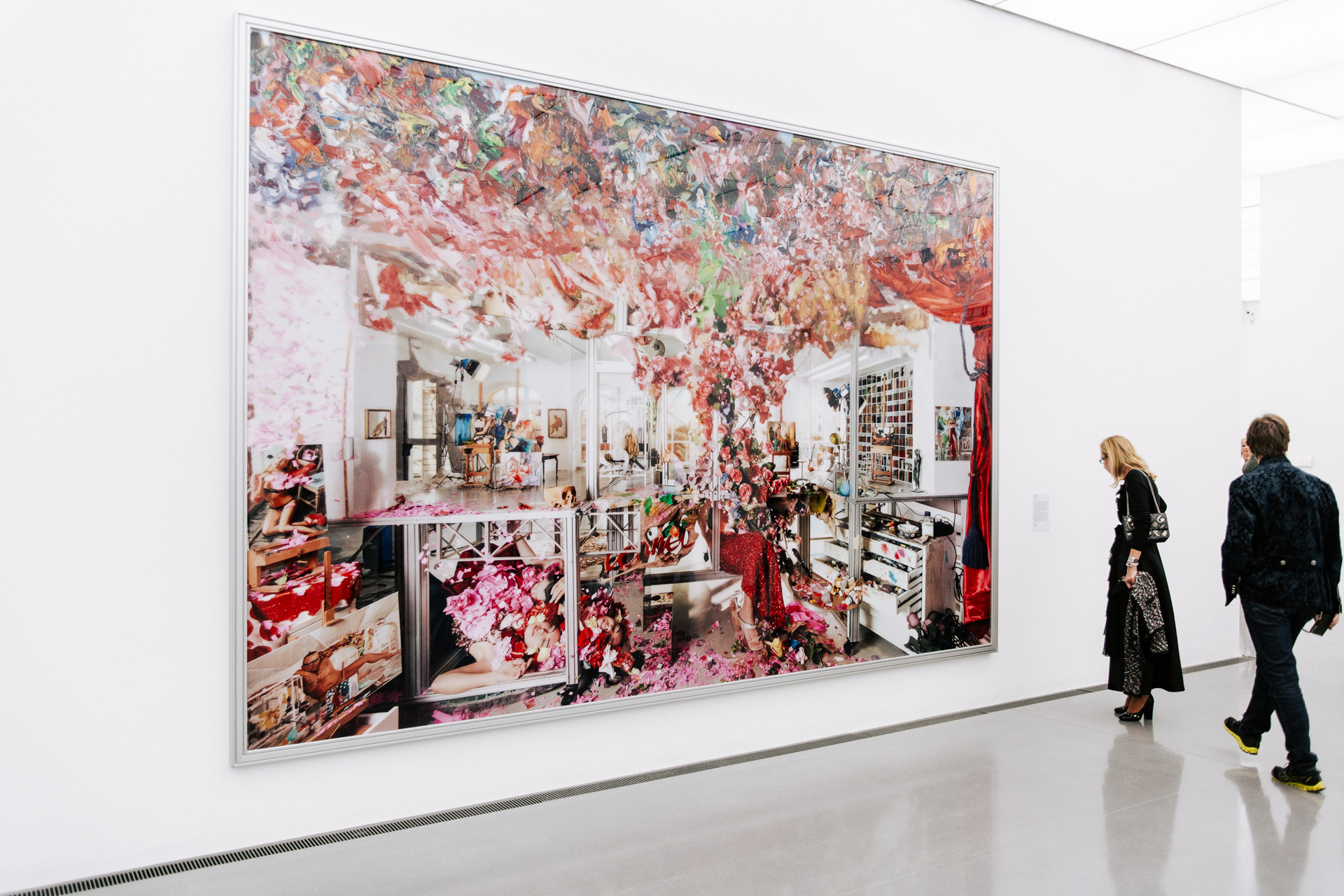 Heliogabalus, also known as Elagabalus, born in Syria, served as a high priest of the sun god Baal; at age 14 or 15 he became emperor. Four years later, at the age of 18, he was murdered. Soldiers slew the painted sun-priest, who had been dressed as women. His corpse was dragged through the streets of Rome, and finally thrown into the Tiber in March 22. Despite his short life, the traditional image of Heliogabalus, who wanted to change his sex, includes a man with visions of luxury cruel or sadistic enough to dream up something so weird. Here, an orgiastic tragedy, Dionysian dream image, spiritual pleasure, and Apollonian death trip meet and become one.

The piece „Roses of Heliogabalus“ by Sir Laurence Alma-Tadema not only depicts the suffocation of people in a highly artistic fashion, but also shows the „Making of“ by presenting a timespace, thousands of roses that had to be painted next to- but also after each other.

It is conspicious that the dying underneath the rose carpet seem to keep still-, almost calm. Yet this way of dying surely does not relate to any death that was common for the people living in Pompeii, almost frozen by the shock due to the extreme heat, but is more a fight against suffocation. This violent act though looks different, which is why the film expels the painting to become history. Painting at that time required the models to remain completely still, not only to be portrayed correctly by the brush and paint but also for the slow exposure of photography. Film got rid of that problem, though not in the quality of a single image, but with thousands successive ones.

The Roses of Heliogabalus is a representation of one of the loudest and most well-known (probably invented) stories about the third-century Roman soldier emperor Heliogabalus showing his unsuspecting guests being suffocated by a shower of rose petals to the amusement and entertainment of the viewers. The original tale of the event mentions violets as the flowers of death. The myth about Tadema‘s sophisticated piece of salon art includes both, his choice of roses being the Victorian symbolic of sensual beauty, corruption, and death, and also his great efforts to get fresh roses from the French Riviera during the last few months of 1887, when it was too cold for English roses to bloom. In order to be able to paint the petals with his special precision, running against time, fighting against corrupted nature, he arranged for rose blossoms to be shipped every week for as long as it took to complete the artwork in dark London (the great realism swindle…).

Like other artists before me, I tried to update this theme by mythization of my own aesthetics, of my own life as an artist. I was not interested so much in the historical figure itself, or the pure history, but in the historical disguise of my own intentions in making art. For me, the young Syrian emperor is also a different Lois, as I dream myself as an artist: Heliogabalus, by virtue of an Imperial command, had the power to shape his empire according to patterns in his imagination, and to transform reality into a boundless orgiastic theatre, in which he appeared as the main figure. He also had the power to overcome Roman rationalism by the introduction of the cult of Baal, and to realize the boundless liberty and anarchy of bodies instead of bounded, rational language. In other words, what I want to realize in art, my faunish heliogabal realizes IN the picture. Just as I want to reconcile art with what we call „life“, a renewed effort, Heliogabalus transforms the Roman throne into a huge Renner model, where all limitations are fully accepted so that they cease to be limitations.

Why took Tadema roses instead of violets? The connection between rose and language/text is evident, especially in Christian iconography. The red rose stands for martyrdom, the white for innocence. Tadema’s products of reality construction are one possibility to see beneath the surface, and so are mine. It is not only about receptions of antiquity in art, or myth, that would be too superficial. I do not want symbols. I want things. Heliogabalus shows flowers.

My studio is always the model for my paintings, and the space to arrange models to work from. In the studio, the site of making, where pictures are created, the problem of the picture time disappears, “half-finished” is always possible, because inside a studio always half-finished and unfixed are to be found. After Modernity, it is hard to do something wrong or bad, the incomprehensible turns into art, anyway. So it’s about time. Man has a beginning in time and an end, often it is better to take a photo than to draw, or to start a 3D print instead of carving
. Time goes by, therefore, the handling of time is the most critical issue and a very interesting task. So I create pictures that compare the timing of yesterday’s visual language and imagery with that of today. To find a new visual language, the linking, combining and merging of past, present and future (images, techniques, things) is essentially. My pictures of Heliogabalus are no isolated windows onto one possible dreamworld. Seeing my artwork is somehow like having access to my studio, an invitee to my place of construction.

Next to film being the new medium for art, painting turned to the stillness of time. It is the oversized format and color, that allow time to be shown (Jeff Wall), becoming the best painting technique of all time by digital alterations!

The creator of The Roses of Heliogabalus was born in 1836 in the Netherlands as just Lourens Tadema. Years later, he changed his first name into Lawrence to be more British & International, and, so it is claimed maliciously, he added Alma to his last name to appear first (or at least at the beginning) in exhibition catalogues. Although he enjoyed great wealth and significance during the Victorian Era, his works began to fall out of favor and his reputation declined up to unsaleability. Tadema was even declared „the worst painter of the 19th century.“ This was to remain until a Met exhibition of a collection of works owned by Allen Funt, an US-American TV producer and creator of Candid Camera (the first Hidden Camera in TV), caused their appreciation and value again to skyrocket in the early 1970s. Tadema worked so meticulously when he studied and researched ancient Greece and Rome, particularly Roman architecture and spatial situations….so that later Hollywood directors and set designers appreciated very much his attention to detail, his paintings, his tableaus have been used as references and ideas for Ben Hur (1926) and Cleopatra (1963).. Gladiator (2000)

From violets to roses to paper, a violet is a rose, is a paper.